As a child I spent a good deal of time wandering the Brooklyn Museum.  The section that fascinated me most was the period room wing.  Sure, very nice rooms from the Vanderbilts or whatever but the amazing parts, the bits that could hold me rapt for hours, staring intently, were the scale models of the buildings that the rooms came from and the fact that the room I was looking at was recreated in miniature next to the real thing.  One of the most important things a work of art does for me is create a sense of intimacy, an almost conspiratorial closeness between the viewer and the artwork.  Those models demanded an ever closer examination and engagement.  The reward for me was to be lost in a private world as an active participant.  This is the singular goal for everything I make.

I have an absolutely horrible memory.  When I do remember things it feels detached, like something I saw in a film or read rather than an actual experience.  As a result, much of my work is an elaborate mnemonic exercise.  I’ve always envied people who remember things “like it was yesterday”.  The only way I can approach that visceral sensation is through my art, digging, parsing, dissecting.  Start with the some core element then work outwards.  Old photographs retain importance as much, if not more, for the background bits as for the subjects. Reconstruct detail, scale and spacial relationships in a series of Aha! Moments.  When it works I am able to keep that as a real memory.  While much of my work is obsessively autobiographical, I don’t think there is anything exceptional to it, and for me, that is it’s beauty.  If I am really lucky, some viewer may look and see some commonality with their own world, like a little boy with his nose pressed against the glass of a showcase at the Brooklyn Museum. 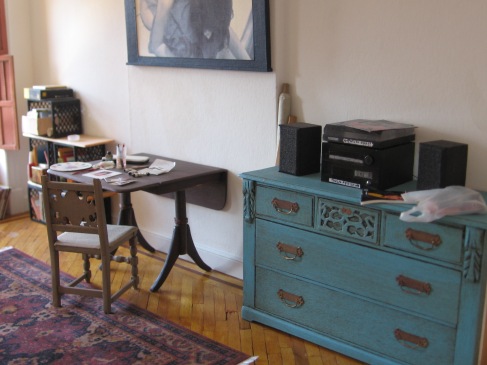 This is a model of my old apartment as it appeared in the spring of 1986.  By pulling info from old photos, measuring things that I still have.  I never considered it a dollhouse and approached purely as sculpture.  Every element is made by me with the exception of the doorknob, and that still bothers me.  I’d look into a dollhouse shop in NYC every once in a while looking how things were done in mini, asking arcane questions of the shopkeeper and ultimately walking out with one or two sheets of basswood. I think he must have dreaded my visits, which, in retrospect, were utterly useless.  American Miniaturist magazine saw this room on my old website and asked if they could write an article about it.  Initially I was aghast, “This is not a dollhouse!?!”  Then I got over myself and realized that most people would see it as a miniature first and foremost.  They weren’t making me compromise the work so, sure, why not. 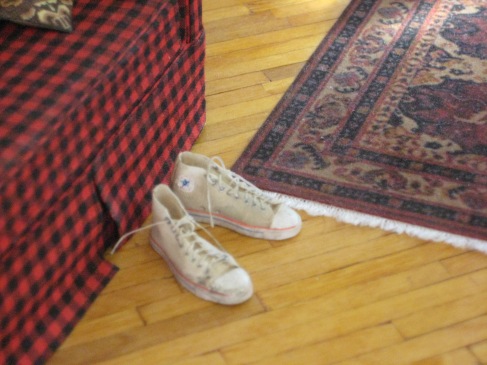